On February 7, 2019, the Center for Immigration Law, Policy and Justice, in co-sponsorship with the Asian Pacific American Lawyers Association of New Jersey (APALA-NJ) and Rutgers-Newark APALSA held a Film Screening of Abacus: Small Enough to Jail. 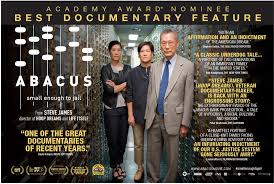 In the wake of 2008 financial crisis, Abacus Federal Savings Bank was the only bank criminally indicted and accused of mortgage fraud by the District Attorney of Manhattan, Cyrus R. Vance Jr. Abacus catered to the Chinese immigrant community, and was founded by Thomas Sung, who migrated at the age of 16 to the United States, attended law school, and eventually moved to Chinatown, where he engaged in pro bono work prior working at the bank, which he did  because he needed to do something for the society.

This case was not only about the corruption, but about exonerating the entire Chinese Community. It had a big impact on the community, insinuating the Chinese were not law-abiding, which cast shame on the community. The case also took a big toll on the Sung family.

Bigger banks had committed and admitted to even worse and more serious crimes, but they were deemed too big enough to fail because it would wreck the financial system. They only had to pay fines, but Abacus was not given that option and was an easy target.

In the end, nobody really lost. Fannie Mae, the supposed victim of said scheme, made hundreds of thousands of dollars, people got their homes, and there were low default rates. The jury was at an 8-4 not guilty dead lock and the judge gave an Allen charge, which resulted in a not guilty jury charge on June 5, 2015. Although they were found not guilty, the effect was already done. The documentary emphasized the gross injustice on the Chinese community.

After the film, the guests were joined by a panel with two Sung daughters, Jill and Vera, who worked at the bank and were involved in the case. Vera Sung discussed the community that stuck by the bank and the family despite being accused of crimes; she recalled that even some would attend the trial and did not stop going to the bank. She additionally commented on the lack of diversity in prosecutor’s offices; she suggested their needs to be people from the community working within the system. She additionally comments on how difficult it is to relive the events by watching the film over and over again, but admits they went through it for a reason and assures people that it will always be a privilege and an honor to talk to people about their experiences.

Jill Sung discussed how she believed prosecutors go after big banks to settle and get money, but do not proceed further because of the ramifications it may have; but going after a family owned bank did not have the same effects, which made Abacus the perfect target. She also addressed that there was never an intention to settle; they knew the DA’s office was coming after them.

Overall, Abacus, now an Academy Award nominee for Best Documentary feature, provides a thought-provoking and heartfelt story about the intersections of race, class and the criminal justice system.